Tanah Papua: A Paradise for Birds

Tanah Papua: A Paradise for Birds

The Birds-of-Paradise Project presents “Tanah Papua: A Paradise for Birds”. Indonesia’s provinces of Papua and West Papua on the island of New Guinea make up the Land of Papua, or "Tanah Papua" in the Indonesian language. This region supports one of the only remaining large tropical forests in the world and is home to nearly half of Indonesia’s biodiversity. Over 600 species of birds are found in Papua, including 27 bird-of-paradise species, many of which live nowhere else on earth. Global interest in Papua’s birdlife is leading to increased opportunity for wildlife tourism and bringing newfound economic benefits to local communities. Sustainable development is not only important for the future of Papua’s forests and people, but also for the world. The Cornell Lab’s Birds-of-Paradise Project is working with the Governments of Papua and West Papua and other international partners to further science, engagement and conservation of the region’s biodiversity with a focus on the birds-of-paradise. http://www.birdsofparadiseproject.org #birds #birdsofparadise #papua #indonesia #tanahpapua #birdofparadise #papua #birdsofparadise 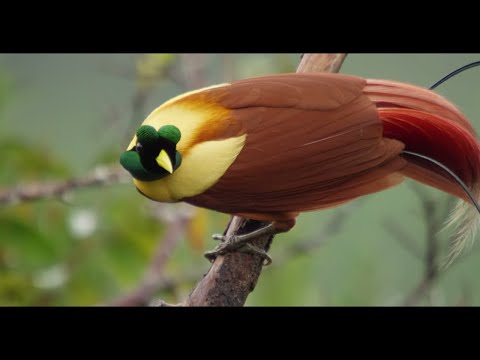 10 Unbelievable Places Created by Nature Itself

10 Most Beautiful Birds in the World

10 Most Beautiful Peacocks in the World

15 Most Beautiful Iguanas in the World

A pink and a blue pigeon.

8 Largest Reptiles in the World

10 Craziest Roller Coasters in the World

10 Cutest Exotic Animals You Can Own as Pets

10 Most UNUSUAL Pets People Actually Own